Boris Johnson: Wind farms could power every home by 2030

Offshore wind farms will generate enough electricity to power every home in the UK within a decade, Boris Johnson has pledged.

Offshore wind farms will generate enough electricity to power every home in the UK within a decade, Boris Johnson has pledged.

Speaking to the Conservative party conference, the PM announced £160m to upgrade ports and factories for building turbines to help the country "build back greener".

He said the UK would become "the world leader in clean wind energy".

"Your kettle, your washing machine, your cooker, your heating, your plug-in electric vehicle - the whole lot of them will get their juice cleanly and without guilt from the breezes that blow around these islands," he said.

Mr Johnson's speech comes after he made a pledge at a UN biodiversity summit in New York to protect 30% of UK land for nature as a "boost for biodiversity".

The scheme will see the money invested into manufacturing in Teesside and Humber in northern England, as well as sites in Scotland and Wales.

Mr Johnson said the government was raising its target for offshore wind power capacity by 2030 from 30 gigawatts to 40 gigawatts.

The commitments are the first stage of a 10-point plan for a "green industrial revolution" from the government, with No 10 promising the rest of the details later this year to "accelerate our progress towards net zero emissions by 2050".

Mr Johnson's speech comes amid a "fractious" mood on the Conservative backbenches about his handling of the Covid-19 crisis, BBC political editor Laura Kuenssberg says.

She said the occasion could provide the prime minister with an opportunity to sell his vision of the country post-pandemic to party members.

But she added this year's speech - to be delivered virtually without a live audience - would not allow him to plug into the energy of a crowd as he normally would. 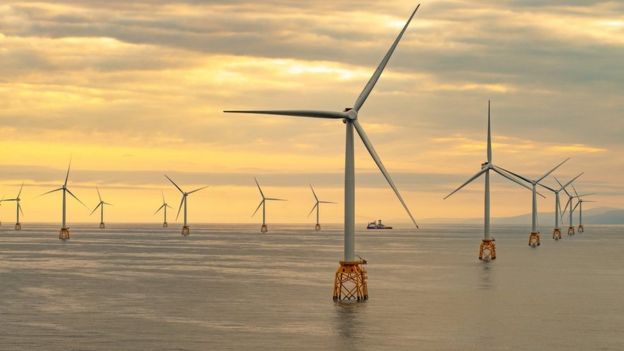 Mr Johnson told the conference he believes that in 10 years' time, "offshore wind will be powering every home in the country".

"Far out in the deepest waters we will harvest the gusts, and by upgrading infrastructure in places like Teesside and Humber and Scotland and Wales, we will increase an offshore wind capacity that is already the biggest in the world."

The PM also repeated his pledge for the UK to become the "Saudi Arabia of wind power", adding: "As Saudi Arabia is to oil, the UK is to wind - a place of almost limitless resource, but in the case of wind without the carbon emissions and without the damage to the environment."

The PM's enthusiastic windy rhetoric has been welcomed by the renewables industry - but there's nothing new about the 40GW figure.

It was previously announced in the Conservative Party manifesto.

What's important today is the promise of cash to improve ports to support the offshore industry in Scotland and the north of England.

It won't just create jobs to replace some of those being lost in the shrinking oil sector.

It could also support the onset of floating offshore wind power, which would allow wind farms anchored in deep water far west of Scotland, where the conditions are challenging but the winds are strong and consistent.

The advances in wind power are momentous, but shouldn't be exaggerated.

The PM is promising enough power all UK homes - but remember, homes only account for a third of electricity demand. The rest goes to offices and factories.

And there's a long way to go before the economy is decarbonised.

The industry is now waiting for the government's long-delayed energy white paper.

That will set the course for onshore wind, solar, and the two latest objects of prime ministerial desire - hydrogen produced by surplus off-peak wind energy; and carbon capture, where emissions are caught and pumped into underground rocks.

Ministers will also have to decide how they can fund the new nuclear stations that Mr Johnson says will be part of the UK energy mix.

The prime minister has previously said the UK should embrace a range of new technologies to achieve its goal of net zero emissions by 2050.

Last month, Mr Johnson said he wanted the UK to take the lead in carbon capture and storage technology, in which greenhouse gas emissions are captured from sources such as power stations and then stored underground.

He also said the UK government was thinking of bringing forward the date for phasing out new petrol and diesel cars from 2035 to 2030.

"If carried through it would help cement the UK's global leadership in this key technology.

"But delivering 40 gigawatts of power on to the grid by 2030 requires action in this Parliament."

Search for articles by tag

Sustainability Engineer West Midlands Staffordshire University is an award-winning institution with over 100 years’ experience in delivering excellent higher education. Our main Stoke-on-Trent campus is located in the heart of the UK, with Centres of Excellence located in the towns of Staffor...

Policy Advisor – Low Carbon Fuels London, South East, West Midlands, Yorkshire Are you passionate about the environment, renewable energy and transport decarbonisation? Do you have Degree in Science or Environmental Studies or relevant work experience in these fields? Are you able to communicate complex information to a wide vari...

Upload your CV for free and get in the active searches of our recruiters.

Boris Johnson: Wind farms could power every home by 2030

Offshore wind farms will generate enough electricity to power every home in the UK within a decade, Boris Johnson has pledged.Speaking to the Conservative party conference, the PM announced £160m to upgrade ports and factories for building turbines to help the country "build back greener".The plan ...